Read the interview with the rising Moscow Artist Irina Lurie 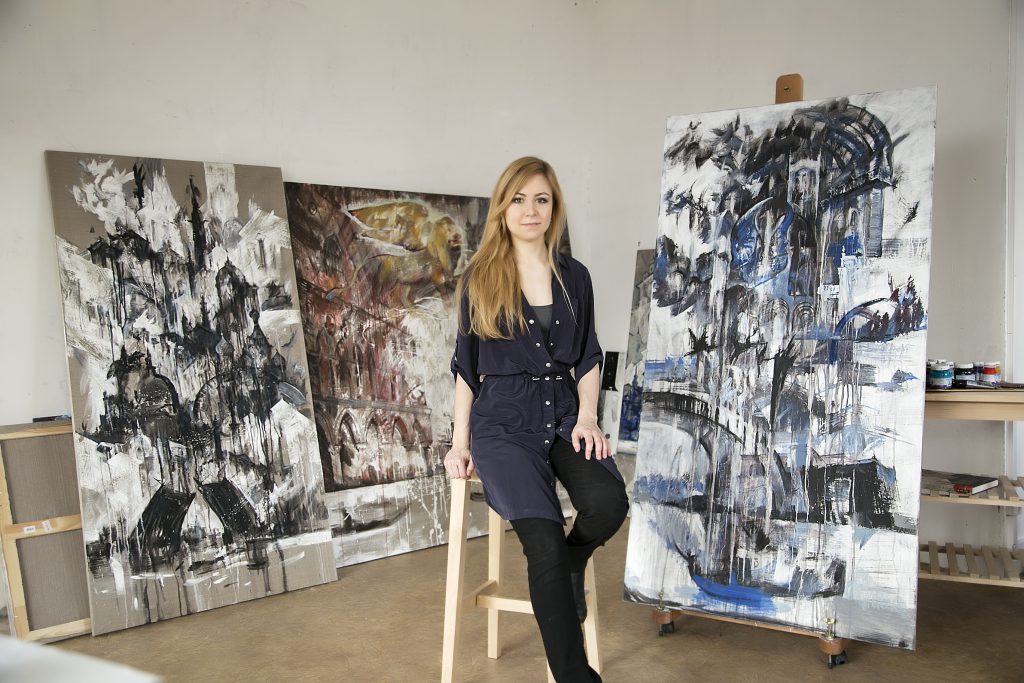 Today I am bringing you something new. This is first of the many artist interviews I will be doing.

Meet Irina Lurie, an Artist from Russia. She graduated from MGHPA Stroganova in Moscow. After graduation, she worked in the British company PRP Architects, created for this company projects of residential and public spaces. She is currently working in Moscow in her own studio.

And this is the interview we did:

Fifth Dimension: “To start this Interview I would like to ask you the question I always ask artists. What does Art mean to you? And what is its purpose in your life?”

Irina: “At first, Art means to me an opportunity to get closer to the “higher meaning.” I hope this is the way that has to elevate the artist himself and humanity to the limit of the highest good and that has to achieve the unity with that Meaning. My goal is to look for this way permanently and move on it.”

Fifth Dimension:  “Do you have any specific goals in your life for which you strive to? What is your biggest challenge?”

Irina: “In the beginning of my artist’s path, my goal was to learn how to draw well, to create works of high artistic level and to gain the freedom of expression. I am still trying to move towards this goal. Now my goal is to create profound works of art, that are breathtaking.

The biggest challenge for me is to aware of the need to continue to create and back to work every day.” 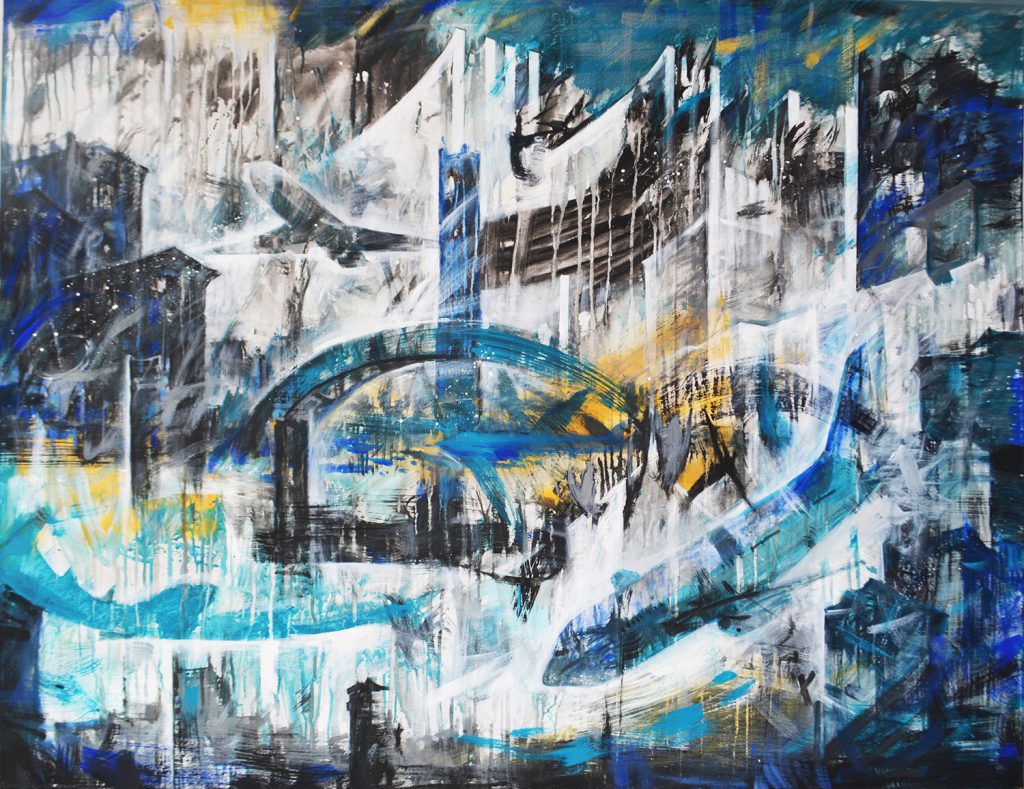 Fifth Dimension:  “How did you first discover your art tendencies? When was the first time you felt like this is what you were meant to do?”

Irina: “I watch a lot of works of different authors, and try to understand exactly what I like about their work, I try to take something for me, rethink that in my work. I always liked the expressive, bold art works, and works of very high mastery .

I started actively engaged in the visual arts after graduation, when l felt the freedom of studying  tasks and began to reflect more , tried to raise  different issues.” 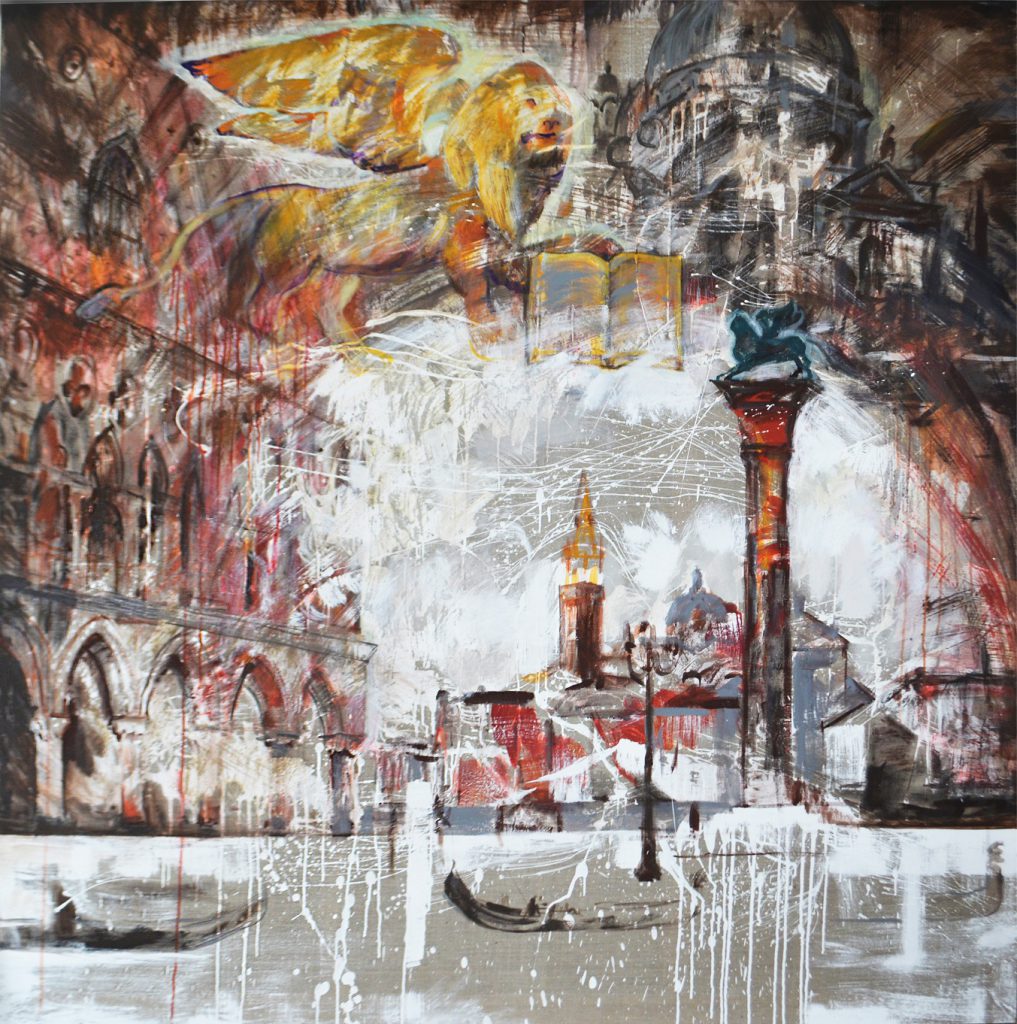 Fifth Dimension:  “As I am myself an Architecture student, I couldn’t but notice that in your work there is a lot of architectural tendencies. How do you create your architecture? And when are you sure that your artwork has reached its peak?”

Irina: “I became interested in architecture since the admission to the University of Art and it inspires me to this day. Various buildings are very interesting objects for me with a lot of detail and its convey the mood. The architecture is connected with the people and says a lot about society. Thus, all sorts of buildings appear in my paintings like the characters and must transfer a certain mood and atmosphere.

I think that the work is finished, when I no longer want anything to change or add to it. It depends each time on an  artwork I’m working. Its are sometimes more  detailed , sophisticated . Sometimes it’s developed very quickly, in minimalistic style. I want to create that works interesting in composition and in technique.”

Fifth Dimension:  “What or who is your biggest inspiration? Where do you get inspired the most?”

Irina: “I am very inspired by the different moods of the world. All sorts of travel and observe the life of the city or locations. I am inspired by observations of people and what they were doing.

I visit different cities and do a lot of sketches from nature, so the ideas come to me. Then  I create those ideas  on large formats of canvas in studio.” 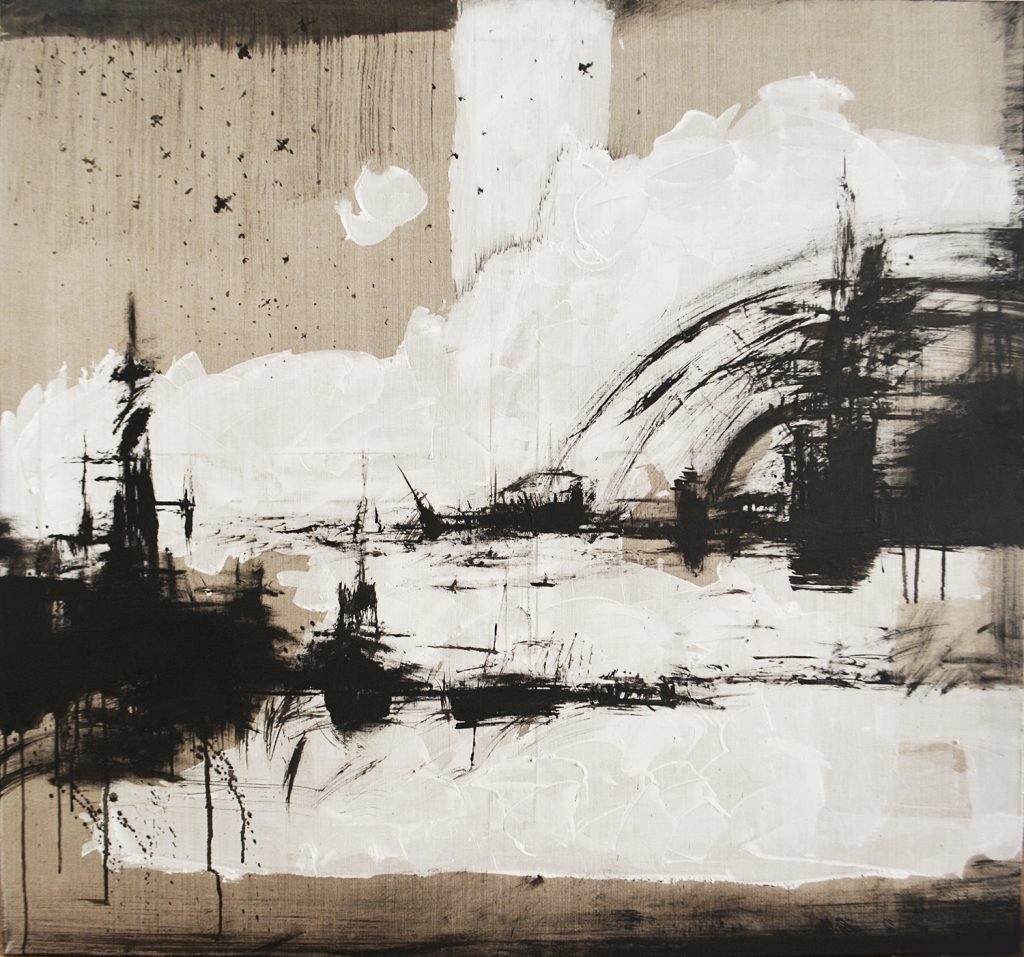 Fifth Dimension:  “Is there any particular work of yours that you love the most? Anything that touched your heart while you were working on it?”

Irina: “Now I would not be able to call some favorite works. Each of the last works, that I think is interesting, dear to me their findings and discoveries that I made while working on them. It’s glad memories of exciting amazement.

Some of the recent interesting work is the work of a series of “Phenomena of the White Nights” which shows images of St. Petersburg, one of my favorite cities. Then work «Utopia» and works from the series dedicated to ancient Rome, work about  Moscow “Architectonics of  Flight” and about  Venice of the same name. I also have interesting works devoted to the films of one of the great Russian director Andrei Tarkovsky. I was very inspired by his films. My paintings are called like his film “Stalker”, “Solaris” and “Nostalgia”. “ 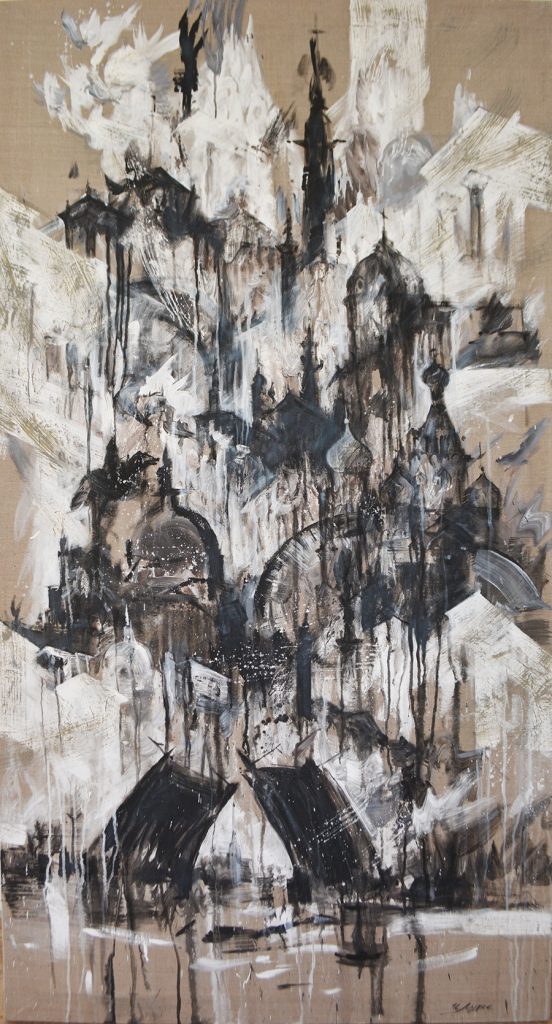 Fifth Dimension:  “In the end, I would like to ask you what is your favorite book which you think that everyone should read?”

Irina: “I can’t call one name of such book, but I can say that in my opinion is worth reading these books that claim to think and reason. Which leads to the need to think about something important and lead eventually to the ultimate questions, such as the meaning of life, the question of own death and the need to strive for something important. I think it is likely unpopular philosophical literature.” 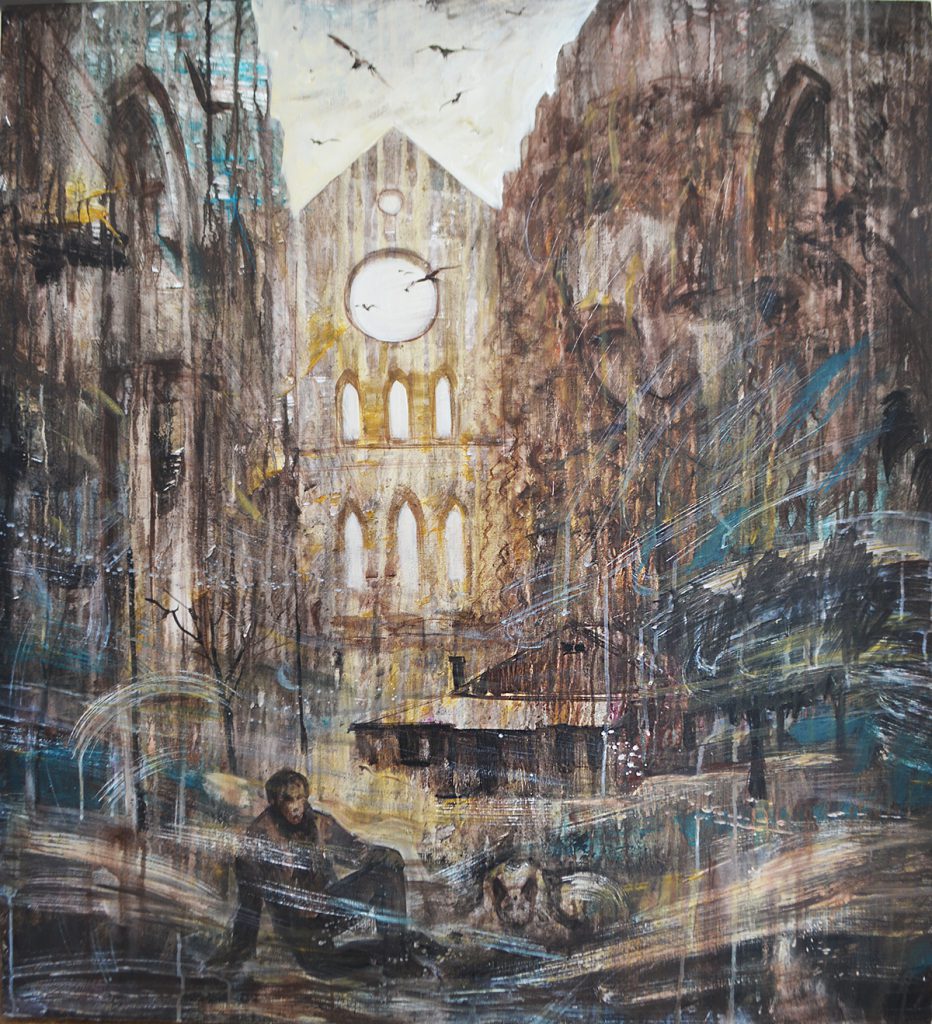 I would like to say Thank you to Irina one more time for making this nice interview with me.

And here are the links where you can see all of her work, on instangram and on her website: